The Government of Nagaland organised a wonderful opening ceremony full of Naga culture and music. The whole ceremony can be viewed below.

KET was honoured to be given two places on the programme when Sylvia May was invited to speak about the origins of the Kohima Educational Trust and Dr P Ngully, was asked to give the closing remarks.

We were delighted that many KET supporters, including a number of trustees, also made the journey to Kohima to join in the commemoration events and to present scholarships to students. You can see the details of our 2019 scholarships here.

The following day we were all invited to the ceremony in the War cemetery organised by the Assam Rifles in conjunction with the CWGC. Their Vice Chairman, Sir Tim Lawrence gave a speech and we were royally entertained by the Assam Pipes and Drums Band. ( pictures and videos available! ) 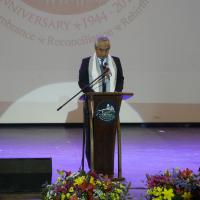 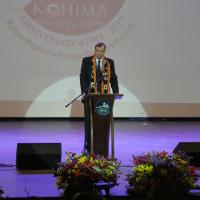